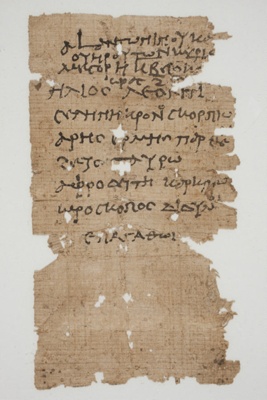 About this objectThis papyrus records a horoscope for 1am, 16 August, AD 161. The translation reads: "Year 1 of Antoninus and Verus, the lords, Mesore 22nd-23rd, 7th hour of the night. Sun in Leo, Moon and Saturn in Scorpio, Mars and Mercury in Virgo, Jupiter in Taurus, Venus in Cancer. Horoscope in Gemini, good luck!"

The reference in the first line is to Marcus Aurelius (Emperor AD 161-180) and his adoptive brother Lucius Verus (Co-Emperor AD 161-169). Mesore was the 12th month of the Alexandrian calendar. It appears that the first four lines were added after the rest of the text, as they are crammed into the space of two lines instead of four.

The practice of using the sun and planets to predict events was developed in Greece during the fifth century BC. Horoscopes based on astrology were particularly popular in the Greek cities of Egypt and the Near East during the first and second centuries AD. This papyrus is a typical example of a horoscope drawn up for an individual and simply contains a list of planetary positions that were used as the basis for predictions.

Papyrus is a plant that grows in marshy environments. Papyrus ‘paper’ is made from the pith of the stem. The stems were crushed and the pith was removed and cut into strips. These were laid on a flat surface, with each strip slightly overlapping the other. Then another layer of strips was laid over the top at right angles, and the two layers were beaten so that they fused. These sheets were then left to dry under pressure. Once dry, the sheet was polished with a round object (eg a shell or stone) to make it smooth and easier to write on.

This papyrus may have come from a dump of thousands of papyri found over the course of several years from the late 19th-20th centuries. Included amongst them were many Greek and Latin literary works, large chunks of the Old and New Testaments, the Apocrypha dating to the 1st-6th century AD, and other minor documents like this one.