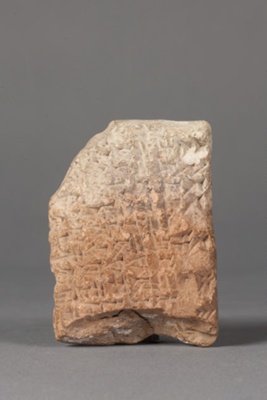 About this objectA narrow tablet inscribed on both sides with Babylonian cuneiform writing. This is an administrative text listing the names of people who have been granted plots of land of between 1 bur (buru) and 1 gan totalling 9 bur and 3 iku. An iku equals one quarter acre, or one thirty-sixth of a bur. Although undated, the script indicates that it is Old Babylonian, from around 1700 BC.

Cuneiform (which means wedge-shaped) is a form of writing that arose in the late 4th millennium BC in Mesopotamia amongst a people known as the Sumerians. A cuneiform sign is made up of at least one of three basic wedges, which can be combined to create infinitely complicated signs.

By pressing the end of a reed stylus into moist clay, the Sumerians were able to draw. Initially, what they drew were just pictures that could stand for an object, or the action which that object did. For example, a picture of a mouth could mean either the noun ‘mouth’ or the verb ‘to speak’.
Eventually the picture could also be the syllable(s) in the word which the picture represented. Since the Sumerian word for ‘mouth’ was ka, the same sign could be used for writing the syllable ka in another word. Over many centuries a complicated system of writing developed in which the stylised pictures could represent either whole words (called ideograms) or individual syllables (known as syllabograms).

Subject and Association KeywordsWriting and art