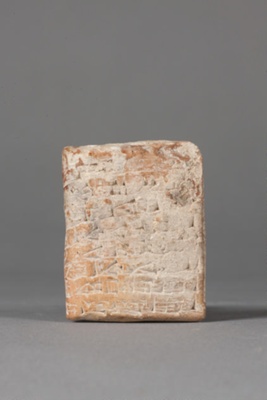 About this objectA clay tablet inscribed on both sides with Sumerian cuneiform script. Cuneiform is a writing style developed in the late Fourth Millenium BC by the Sumerians, using a reed stylus to create various wedge-shaped signs. The surface of this tablet is worn, and partly illegible. According to Professor D.J. Wiseman, (University of London, 1971), this is an administrative tablet, probably a receipt for sheep, which are described in lines 1-2.
It is dated 25th day, month IV, in the "year after the great ship Dara was launched" or the third year of Su-Su'en of Ur (3rd Dynasty), ie. 2035 BC.

For further information on cuneiform in the broader context of other writing systems, see "Reading the Past: Ancient writing from cuneiform to the alphabet" by JT Hooker et al. (Berkeley, 1991)

For similar inscriptions see TB Jones and JW Snyder's "Sumerian Economic Texts from the Third Ur Dynasty: A catalogue and discussion of documents from various collections" (Minneapolis, 1961, reprinted at Westport, Connecticut, 1974).

For a more recent approach to studying these tablets, see 'Digitising Cuneiform Tablets' by Carlo Vandecasteele et al, in "Images and Artifacts of the Ancient World" edited by AK Bowman and M Brady (Oxford, 2005)

Place NotesSumer was once the southern division of Mesopotamia in the area that was later to become Babylonia, and is now in Southern Iraq from Baghdad to the Persian Gulf. Building upon a development of increasing progressive cultures, it is widely considered to be the first urban civilization. By the 4th millennium, Sumer was divided into 12 city states: Kish, Erech, Ur, Sippar, Akshak, Larak, Nippur, Adab, Umma, Lagash, Bad-tibira, and Larsa. Under the rule of Sargon of Akkad, political unity was imposed over Mesopotamia as a whole, ca. 2340 BCE. Sumer regained some it past power under the Third Dynasty of Ur (ca. 2060-1950 BCE), but the civilization disappeared as a distinct entity with the rise of Babylonia.