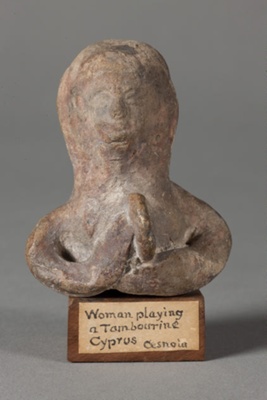 About this objectThis worn figurine appears to show a woman playing a musical instrument known as a tympanon, or tambourine. The person holds the tympanon in their left hand, and the right hand is used to beat it like a type of drum.

The figure is made of a reddish clay that has turned cream-buff on the surface after firing. The base of the figure is a hollow cylinder, to which a moulded face and shaped arms were added. Unfortunately the lower section of the figure under the arms has broken off. The face has a broad mouth with heavy lips, prominent ears, and outlined eyes, and the back of the head is relatively flat. There are traces of dark red paint over the front, and black paint on the hair.

A large number of Cypriot figurines were created using this combination of sculpting techniques. The face was made with a mould, the body made on a wheel, and the rest of the figure was hand-made and added to the base.

The figure is most likely female, as there seem to be breasts either side of the instrument, but the face could be either male or female. In some cases, these figurines use the same face for both male and female figures. It was quicker to mass-produce the same features instead of individualising each piece. The creators of these pieces were called coroplasts, meaning modeler of figurines. These modelers most often worked with terracotta or wax, and would mass-produce popular figures, often with very little variation.