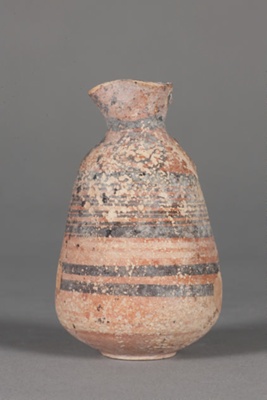 About this objectThis sack-shaped jug is an example of Bichrome redware found in Cyprus in the Iron Age. Cypriot Bichrome ware is characterised by the use of black and red lines and decoration on a white background. With Bichrome redware, the red decoration is replaced with white, and the slip used is often a shade of red.

Cypriote potters developed local traditions from the Late Bronze Age in their repertoire of shapes and incorporated various forms of Aegean and Levantine origin. The sack shaped jugs are based on a style that developed in Levant, which is the Near Eastern area along the eastern coasts of the Mediterranean, around the region of modern Syria, Lebanon, Jordan, and Israel.

This jug is made of a fine pinkish-buff clay that has paled at the surface, and has had a pale red slip washed over it. The body has straight sides and is wider at the bottom with a shaped mouth. The handle is missing and the surface is very worn. There are lines of band decorations from the neck down to the lower sides painted in matt black, with some white bands in between. The handle appears to have also been painted.

MeasurementsHeight 97mm (from base to lip); Diameter 59mm

Credit LineFrom the collection of HD Broadhead and given by Mrs Broadhead, 1968.