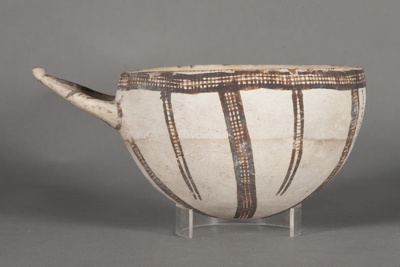 About this objectThe White Slip 'Milk Bowl' is one of the most famous creations of the Late Cypriote Bronze Age. These bowls were very popular in the Aegean and the Levant in this period, and were exported around the Mediterranean.

The name 'milk bowl' doesn't come from its use however, but from the white slip that covers the bowl. Their use is not known, although at one point it was believed they were used for making yogurt.

This example is a finely made, near hemispherical bowl with a triangular wishbone handle. It has a thin wall that may have been made by shaping it around a gourd or similar shaped round object. The bowl is made of dark brown clay and has been covered inside and out in the white slip that give it its name. Decoration has been added in matt black paint that has lightened to brown where it is thinner.

Around the rim is a double line filled with cross-hatching. Coming out from this band are six fairly evenly spaced similar bands, alternating with thinner, simpler bands. The handle is decorated with strokes of paint on the upper side, and lines along the underside. There are narrow bands around the handle roots where they join to the bowl. The decoration suggests that the bowl was hung when not in use, so the decoration would be visible.

Inside the bowl "Arpera" is written in pencil. It is suggested that this refers to the Late Bronze Age cemetery of Arpera Chiflik in Agios Andronikos, Cyprus. This site was excavated in 1914 by Menelaos Markides, then Curator of the Cyprus Museum.

Inscription and MarksInside the bowl "Arpera" is written in pencil.

Credit LineDonated by the Christchurch Classical Association, 1953. Purchased from Spink's, 1951. Formerly in the collection of James H Rea.