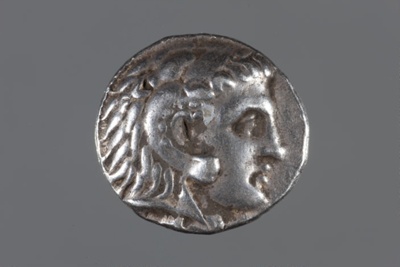 About this objectThis tetradrachm was minted during the latter years of Alexander the Great’s kingship. The coin was produced on the island of Cyprus, which Alexander conquered in 333 BC. Having previously been ruled at different time periods by Assyria and Persia, Cyprus came to be heavily influenced by Greek culture and religion.

The obverse side of this coin depicts the head of a beardless Heracles wearing a lion skin. On the reverse, Zeus is seated on an elaborate throne. He holds an eagle in his right hand and a sceptre in his left, which were powerful symbols associated with the god. Around the image are the inscribed words, ALEXANDROU BASILEŌS, meaning “King Alexander”.

Alexander was said to have made claims that he was the son of Zeus. Some sources suggest that the Oracle of Siwa informed Alexander of this fact. Others suggest that Alexander’s mother Olympias believed she had been impregnated by Zeus in the form of a serpent. Nevertheless, Alexander’s association with the god was propagandist in its connotations of supreme power.