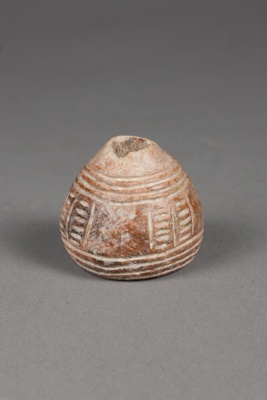 About this objectSpindle whorls have been found dating back as early as the 10th century BC. They are a disc or spherical object with a hole through the middle that act as weights from wooden drop spindles, and can be made of any convenient local material. Whorls have been found made of antler, bone, coral, amber, clay, glass, metal, wood, and different types of stone.

Their weight helps give the spindle momentum in the twisting, or spinning, of fibres into yarn. The yarn could then be turned into textiles. Spindle whorls should ideally be circular and have a fairly regular cross-section, as lopsided whorls would upset the balance of the spindle and give an uneven result.

This spindle whorl has been made of pinkish-buff clay which has been modelled around a stick about 1cm round to give the central hole. The whorl is a rounded conical shape tapering at the top and slightly at the bottom. The surface is covered with a red-brown slip, and line decorations have been incised into the surface. Around the top and bottom run sets of four concentric circles, and between them on the sides are four sets of double ladder motifs. On the base, around the edge are four sets of concentric semicircles. Concentric circles and semicircles are a common decoration on Bronze Age spindle whorls.

Spindle whorls found in tombs frequently show signs of previous use. Because of a common assumption that spinning would have been women's work, the presence of whorls was often taken to indicate that associated burials were of women, even when the deceased could not be identified.