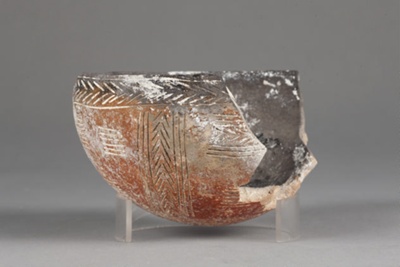 About this objectThis hemispherical bowl has a round base. Shapes like this are often created by moulding clay around a gourd or other spherical object. This allows the maker to get an even thickness for the walls without compromising the circular shape.

The missing segment of the bowl may have had a lug included, for use as a handle or hanging point, similar to other bowls found with this one. It is made of pale brown clay that has fired grey-black, and the surface has been covered with a slip that has fired red over most of the outside but has turned black around the rim and on the inside.

Decoration has been incised into the slip to create contrast with the clay underneath. Around the rim a row of chevrons (arrows) pointing to the right run between a pair of lines. The wall of the bowl has been divided into zones using vertical bands of downward chevrons running between groups of three vertical lines. The zone spaces contain groups of seven horizontal lines. The zone space to the left of the break has a band of right chevrons running between sets of three horizontal lines. A set of four lines runs around the base as a lower border.