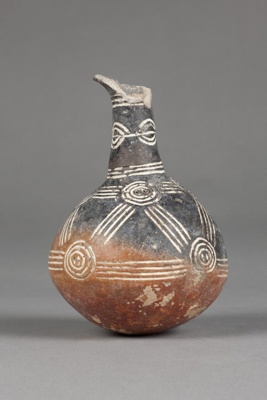 About this objectThis round-bodied flask was found in a pit-tomb in Cyprus. It has been handmade from fine pale brown clay that has fired grey. The surface is covered in a red-brown slip that has fired matt black over the upper half.

Concentric circles, each containing a double dash at the centre, have been incised in two levels around the body. These are connected, both horizontally and diagonally, by groups of four lines to create a repeating triangle-like pattern. This pattern is sometimes referred to as a 'sling-net' pattern, and it is thought to be a stylised representation of the nets used to carry similar bottles and flasks. The lines show the string being joined by the circles, which represent knots.

Sets of three lines ring the upper and lower neck. Around the middle of the neck are a row of double circles that have been bisected by a horizontal line. All the incisions have been filled with white lime paste to create a striking contrast.