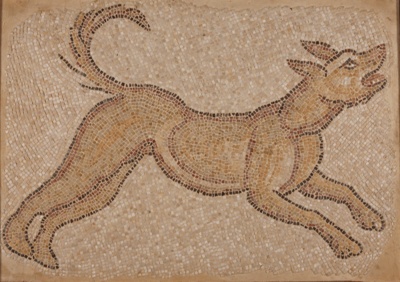 About this objectMosaics are made up of pieces called tesserae, which are arranged in dirt or mortar to create a pattern or picture. A tessera (Latin for tile or cube) can be made of stone, ceramic, glass or similar hard objects, and pebbles were used in early examples. The tesserae of this floor mosaic are made of cut stone and are approximately 10x12 millimetre cubes, although some used in the outlines are a bit smaller. The smaller the tesserae, the more intricate and detailed the design can be.

This section of mosaic is of a dog. It is most likely not a specific breed, but the strong neck and hind legs indicate it is probably a hunting dog. Although it is shown to be short-haired, there are long tufts on the tail.
The colours that make up the dog are grey, pale brown, orange-brown, and various shades of matt red. The outline is done in black and grey-black tesserae. The contours of the limbs and body are shown both with colour grading and also with the arrangement of the tesserae in lines following the shape. Around the outline there is a double line of tesserae, then the background is filled more randomly although it has a tendency to run diagonally to the upper left. The surround is a mix of white, pale brown and grey tiles.

Mosaics appear to have developed from the use of spreading harder material such as pebbles onto dirt floors to make them more durable. Mesopotamians and Greeks turned this into an artform by creating geometric patterns and designs with the stones, but the peak of ancient mosaics was in the wealthy Roman provinces, especially in Africa and Syria. Mosaics became not only an attractive, durable (and easier to clean) floor covering, they also became a sign of wealth, with designs inspired by myth, art and daily life created in intricate detail for all their guests to see.

Place NotesThe style suggests the piece is from Syria