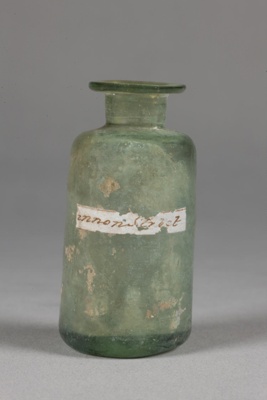 About this objectA straight-sided flask of pale green translucent glass, the vial is well made with very few bubbles. The vertical neck has an out-turned lip. It appears to date to the second century CE and is reported to have been found in an excavation at Cannon Street, London.

In the second century CE, glass was being mass-produced using molds to shape blown glass. Glassblowing had been invented in the first century CE and produced a much better quality glass that could be used to create vessels with much thinner walls. This gave a more translucent object, and also allowed glassmakers to create a new range of shapes. Colours could be created by adding different compounds, such as adding copper or lead to give a more intense green, or cobalt for an intense blue.

Previously, glassware was made by casting or cutting, similar to how bronze statues were produced. This method not only took longer and was more expensive, it also resulted in vessels with much thicker walls, making the pieces heavier, less intricate and less translucent.

MeasurementsHeight 69mm; Diameter 35mm (towards base)