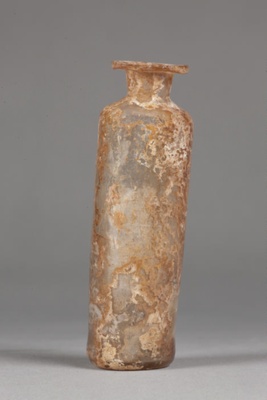 About this objectThis piece of Roman glass is believed to have been excavated in Cannon Street in the city of London and likely dates to the 2nd century CE. By the end of the 1st century CE Londinium (London) was Roman Britain’s largest planned city with a population of 60,000 people. The vial is a tall straight-sided vial made of clear glass. It has a flattened, out-turned lip and the underside is slightly raised.

The invention of glassblowing led to an enormous increase in the range of shapes and designs that glassworkers could produce, and the mold-blowing process soon developed as an offshoot of free-blowing. A craftsman created a mold of a durable material, usually baked clay, although sometimes wood or metal could be used. Designs were usually carved into the mold in negative, so that on the completed glass they appeared in relief. Molds were made of at least two separate parts fitted together, so that it could be opened and the finished product inside removed in one piece. They could be detailed and intricate, or they could also be used for standard, utilitarian shapes. The ability to mass-produce jars of a consistent size and shape was a great advantage for supplying merchants selling products marketed in glass containers.

To create an item, glassmakers would take some molten glass at the end of the blowpipe and then inflate it into the mold to take on the shape and pattern. The vessel would be removed from the mold while it was still hot and malleable enough to continue to work, forming the rim and adding handles when necessary. At this stage, the mold could be reassembled for reuse.

A mold could be used multiple times, but the decoration would eventually wear and deteriorate, or the mold could break and become worthless. New molds could be created in two ways: a completely new mold would be made, or an existing glass vessel could be used to take a copy. In this way, multiple copies and variations of mold series were produced, as mold makers would often create second-, third-, and even fourth-generation duplicates when needed.