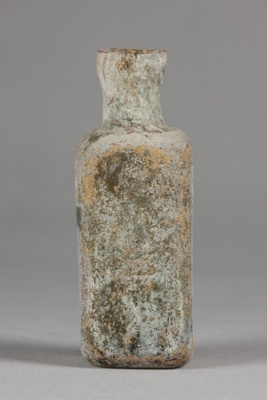 About this objectThe vial has a square body with a roughly cut mouth shaped like a tulip. The underside is slightly raised in the centre. There is some iridescence on the surface.

The piece is believed to have been excavated in Cannon Street in the city of London, and likely dates to the 2nd Century CE.

Iridescence is a valued quality of ancient glass. The word is based on Iris, the Greek goddess of rainbows, and is used to describe the rainbow-like changing colours that appear on the surface at different angles or in different lighting. The effect occurs from the weathering of glass, which is caused by alkali (soluble salt) being leached from the glass by slightly acidic water and then forming very thin layers that can separate slightly or flake off, affecting the way light bounces off and passes through the surface. This creates a prism effect that can produce a rainbow of colours.

Another type of iridescence that can form is a patina, which is the accumulation of metallic compounds to the surface of the glass.
The amount of weathering can be affected by burial conditions (humidity and soil type), and in part by the chemistry of the glass. Although ancient glass was made basically the same way as modern glass, the ratio and purity of the raw materials could vary. The alkali compound required also varied by region, with the Western Provinces tending to use potash (potassium carbonate) and the Eastern Mediterranean using natron (sodium carbonate). Glass made with potash has less iridescence than glass made with natron, which can sometimes produce very vivid bronze, gold, and bright pink tones. In this way, iridescence can be an indicator of the region of origin, as well as a sign of age.