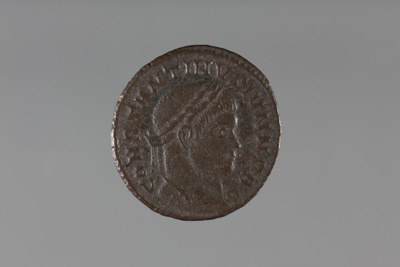 About this objectA bronze follis of Constantine II, minted in Trier between 323 and 324 CE.

Flavius Claudius Constantinus (Constantine II) was the eldest son of Constantine the Great and Fausta. Born in 316 CE, his father made him Caesar on March 1st, 317, and at the age of seven he joined his father on campaign against the Sarmatians. It was around this time that this coin was made, with a bust of the young boy wearing a laurel wreath on one side, and the other proclaiming his vows, or prayers, for 10 years rule, inside another laurel wreath. The decennial vows (10 years) date from the reign of Augustus, who first accepted government for a term of 10 years, before taking on further terms. Often these vows could be anticipated for much longer than was fulfilled, with the ruler dying before reaching that milestone.

Constantine II managed to complete his 10 year vow, becoming joint emperor with his brothers Constantius II and Constans in 337 when his father died. The brothers divided the Empire between themselves, but Constantine was unhappy with the portion he received, claiming that as older brother he should have a larger territory. Having acted as guardian to his younger brother Constans, he was unwilling to give up his control when Constans came of age. In 340 CE he invaded Italy, but he was met by the vanguard of Constans' army and was killed in battle near Aquileia, allowing Constans to gain control of his realm instead.