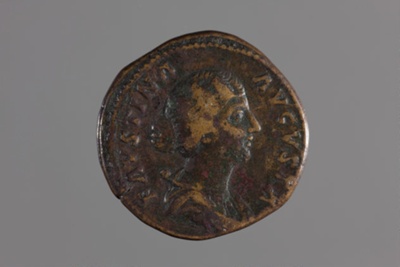 About this objectAnnia Galeria Faustina Minor (known as Faustina Minor, Faustina the Younger, or Faustina II) was the daughter of Antoninus Pius and his wife Faustina the Elder. She was married to Marcus Aurelius, her cousin and also the adopted son and successor of her father. When Antoninus died in 161 CE, Marcus Aurelius and Lucius Verus became co-rulers. Faustina had been given the title Augusta in 147 CE, which made her the first woman to succeed her own mother as Empress of Rome. She travelled extensively with Marcus Aurelius on his tours of the Empire, and was held in high esteem by the soldiers, earning the title 'Mater Castrorum' (Mother of the Camp). The couple had eight sons and six daughters, including two sets of twins.

The reverse of this bronze sestertius probably shows Faustina standing with six children, although some experts think the figure is Fecunditas, goddess of fertility, who is commonly shown with children during this period. Two girls stand to her left and two on her right. In her arms are two boys. Girls were shown clothed, boys were often shown naked.
If the woman is Faustina then these six children are Faustina, Lucilla, Fadilla, Cornificia, and in her arms the twins Commodus and Antonius. Commodus, likely most recognisable from his bust as Hercules, complete with lion skin and club, would later become emperor.

This coin shows a common theme with two other coins in our collection issued for Faustina Minor (see JLMC180.96.25 and JLMC180.96.26). These other coins also depict female figures with children, and are likely referring to the births of her children T. Aelius Antonius and Lucilla.