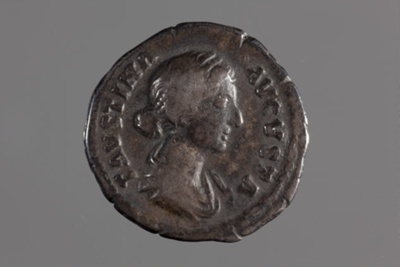 About this objectAnnia Galeria Faustina Minor (known as Faustina Minor, Faustina the Younger, or Faustina II) was the daughter of Antoninus Pius and his wife Faustina the Elder. She was married to Marcus Aurelius, her cousin and also the adopted son and successor of her father. When Antoninus died in 161 CE, Marcus Aurelius and Lucius Verus became co-rulers. Faustina had been given the title Augusta in 147 CE, which made her the first woman to succeed her own mother as Empress of Rome. She travelled extensively with Marcus Aurelius on his tours of the Empire, and was held in high esteem by the soldiers, earning the title 'Mater Castrorum' (Mother of the Camp). The couple had fourteen children, including two sets of twins. Of the eight sons and six daughters, only six lived beyond childhood, and only one son and four daughters survived their father.

The addition of a child to the imperial family, or the successful marriage of one, was a notable occasion, and there were a number of coin types produced to acknowledge such events. Fecunditas, goddess of fertility and fruitfulness, was the one most often used to illustrate family and this aspect of the empress.

On this silver denarius, Fecunditas is shown standing with a sceptre in her right hand and a child on her left hand. This coin issue is thought to relate to the birth of Lucilla, twin sister of Gemellus, who was married to Lucius Verus (co-emperor) in 164 CE.