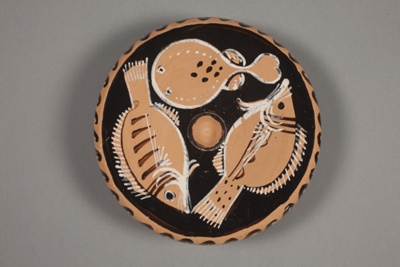 About this objectPopular among the Greeks and their South Italian colonies in the 4th century BC, fish plates are a special form of plate used by the ancient Greeks. The shape of the plate is a pinax or pinakion (Latin for tablet, board, or plate) elevated on a pedestal, with a downturned rim and a small depression in the centre. They are decorated with various types of fish and seafood, which is how they get their name. Interestingly, in Attic (Greek) examples, the fish are painted with their bellies towards the outer rim, but Italian artists tended to paint the fish with their bellies towards the middle, as seen on this plate. Artists from South Italy often also included other colours, such as white, while the Attic artists kept to the traditional red-figure style of black slip over red clay.

It was originally thought that these plates were used to serve cooked fish, and the depression was to catch the juices or hold a sauce. Later studies have suggested that the plates are perhaps too small for this purpose and were either 'chips-and-dip' style snack serving plates, or used as offerings for the dead. Many are found in a funerary context, and it has been suggested that the depression was used to hold a token amount of oil or sauce for the painted fish, as symbolic sustenance for the dead on their journey.

This example is in good condition, with a lustrous black glaze over the surface of the plate. The three fish depicted have been identified as a sea-perch, a sargus or bream, and a torpedo (electric ray). They have white detail added, especially on the fins, gills, and bellies. A black wave pattern is painted around the rim, in keeping with the watery theme. The central depression and the underside of the plate have been left as bare clay.

Subject and Association KeywordsFood in art