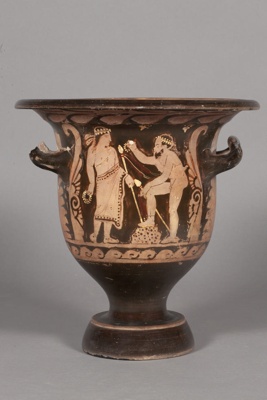 About this objectShortly before the middle of the fourth century CE,a small group of migrant potter-painters arrived in Paestum in Campania, apparently from Sicily, and set up a thriving workshop. Heavily influenced by Greek culture, their wares often feature scenes relating to the cult of Dionysus (sometimes spelled Dionysos). Two active painters of that period, Asteas and his younger colleague Python, produced a series of vases in a distinctive style.

This bell-krater attributed to Python is a typical example, including the characteristically Paestan use of half palmettes to frame the scenes. Images of the god Dionysus with a single companion (often a satyr, maenad, or actor) are standard in Python's mature work.

Side A shows Dionysos with a silen. Dionysos stands on the left, holding a wreath and a thyrsos (a type of staff). The silen also holds a thyrsos, as well as an egg. Side B shows two youths in himatia (cloaks) with wreaths and slippers. One has a spray of leaves or flowers, the other has a fillet (ribbon tie) and both carry a staff. Details on both sides have been added in purple-red and white, some with a yellow wash. The two scenes are separated by the Paestan-style half-palmettes, and there are palmettes beneath the handles. Below the scenes and running all around the vase is a band of wave pattern.

The overall theme of the vase is life after death. The egg held by the silen represents resurrection and rebirth after death, and the two figures in the scene imply a happy afterlife for the person in whose grave the vase was placed.