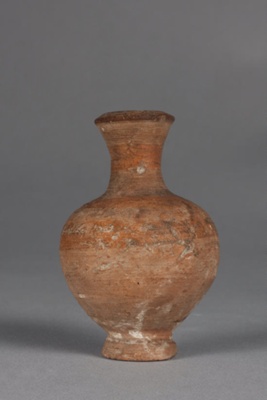 About this objectAn unguentarium was commonly used to hold ointments, balms and perfumes. Often these would be oils, but they are also suitable for storing and dispensing powders and liquids. Dating to the later part of the fourth century BCE, this vessel has a rounded body with a narrow neck and a flat foot. It is decorated with bands of a shiny orange paint, one on the neck and two on the shoulder. Some discolouration makes the vase appear to have been over-fired.

The name 'unguentarium' is commonly applied to toiletry bottles from the Hellenistic and Roman periods. The name appears to have been invented in the 19th Century to describe the 'container for unguents', based on the word unguentarius (perfume seller) and other terms based on the Latin 'unguentum' used in connection with perfumes. They have also been called a lacrimarium (tear-container) or balsamarium (balsam-container), and tend to fall into the wider category of 'ampulla', or small containers, in scholarly literature.

Many unguentaria are discovered at gravesites as offerings buried with the dead, steadily replacing the lekythos as an oil container in later periods. They were also used as product packaging for trade, to ensure the desired amount was properly dispensed from the bulk product. At home, women would use these containers for their perfumes and other toiletry necessities. The small containers were ideal for keeping perfumed oils and cosmetic lotions fresh. One example has been found that contained an almond-based perfume.