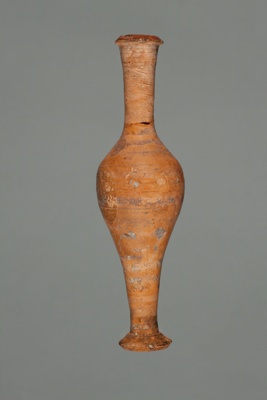 About this objectThis is a fusiform unguentarium, with the characteristic spindle shape. The ovoid body of this vase has a long neck and stem, which finishes at a distinct foot which is slightly raised on the underside. The orange-buff clay has been smoothly but poorly finished, and the mouth was dipped in a slip that fired red. Around the body are horizontal marks that may have been an intentional part of the manufacture process, or a form of decorative technique. A small circular mark on the shoulder may be a patch or mark of additional clay.

An unguentarium was commonly used to hold ointments, balms and perfumes. Often these would be oils, but they are also suitable for storing and dispensing powders and liquids.

The name 'unguentarium' is commonly applied to toiletry bottles from the Hellenistic and Roman periods. The name appears to have been invented in the 19th century to describe the 'container for unguents', based on the word unguentarius (perfume seller) and other terms based on the Latin 'unguentum' used in connection with perfumes. They have also been called a lacrimarium (tear-container) or balsamarium (balsam-container), and tend to fall into the wider category of 'ampulla', or small containers, in scholarly literature.

The place of manufacture for this vessel is not known. Unguentaria were made throughout the Greek world during the Hellenistic period. This one can be dated to around 200 BCE.

Many unguentaria are discovered at gravesites as offerings buried with the dead, replacing the lekythos as an oil container in the Hellenistic period. They were also used as product packaging for trade, to ensure the desired amount was properly dispensed from the bulk product. On a personal level, women would keep these containers for their perfumes and other toiletry necessities. One example has been found that contained an almond-based perfume.

The narrowness of the neck and base of this style of unguentarium would possibly make it difficult to keep upright. It is thought that they were kept in a larger container to prevent spills and keep the small vessels together. Evaporation of expensive or precious liquids was minimised though, as the long narrow neck helped reduce this problem. The possibility of loss through porous ceramic was also remedied with the development of blown glass, which came to replace clay as the base material.