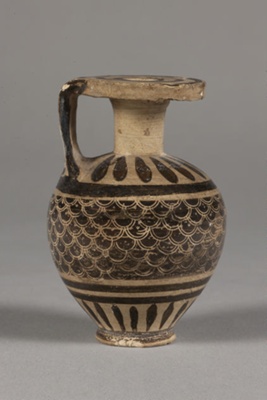 About this objectThis pointed aryballos is a container for oil. The narrow opening surrounded by a wide flat disc, connected to the shoulder by a single handle. The shape aids in controlling the flow and spreading of oil or perfume from the bottle. Aryballoi were commonly used as scent bottles, especially by athletes at the gymnasion or palaestra, who would oil themselves before training. Once finished they would scrape off the oil, dirt and sweat with a strigil, or curved metal scraping tool. Athletic scenes on vases and funerary markers sometimes show aryballoi being used by athletes, or hung nearby, often with a sponge or strigil. The vase could also be worn tied around the wrist with a string looped through the handle.

Decoration on an aryballos was often intricate and detailed, despite the small area to work on. This vase has a wide band of scales around the body, with sunburst rays coming up from the base and down from the shoulder. The scales have been carefully incised to create accurate double curves. The centre point in each scale may be where a compass was set to draw each semi circle. Although this vase uses a single dark shade of slip, other examples have also had red, yellow, and purple detail added.

The aryballos was a common shape in Corinthian ware, and as the Corinthian style was extremely fashionable in Etruria, the small oil bottle was also popular in Etruscan wares. The body shape of an aryballos could range from globular (round-bodied) to piriform (lengthened pear-shape).