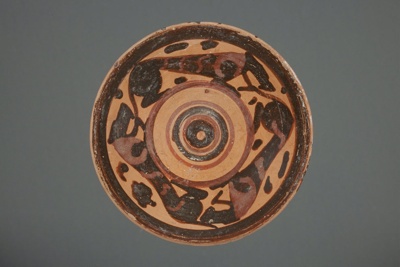 About this objectA phiale is a shallow bowl, usually with no feet or handles, that is used for libations. The Romans called them patera. Some, like this example, have a domed centre, or indentation underneath to aid in holding.

This phiale is made of a hard, smooth, pale brown clay, decorated with black and dull red slip. Around the central dome are three elongated lions, facing right. Leaf-like motifs fill the spaces around them.

Libation, making a liquid offering to a deity, was an important part of daily life for the Greeks and many other ancient cultures. It was one of the most common and simple acts of piety and religion. The most common offering was wine or scented oils, but other liquids or even grains have been used in various regions. The typical form of libation was spondȇ, the ritualised pouring of wine from a jug or bowl in the hand. Wine was poured from an oinochoe (wine pourer) into a phiale. The phiale was held out and the contents offered to the gods or spirits. A lekythos in our collection shows a woman performing this rite (JLMC 9.53). After the offering was poured, the remainder of the contents were drunk by the celebrants.

Symposium etiquette included offerings to the gods. One known order was that on the opening of the first krater of wine, the libation was made to Zeus and the Olympian gods. The first serving of the second krater was offered to the heroes, and the third (supposed to be the last) would be offered to Zeus Teleios (Zeus who Finishes) or Zeus Soter (Zeus the Saviour). Libations poured onto the ground were for the chthonic deities (of the underworld), or for the dead, and funerary scenes often show this act.

Greeks would simply stand to perform this rite, with arms raised or phiale outstretched, but the Romans are often shown performing libations over an altar, sacrificial table, or tripod. These scenes are commonly found on Roman coins, showing the piety and divine favour of the Emperor.

MakerAttributed to the Workshop of the Pittore senza Graffito