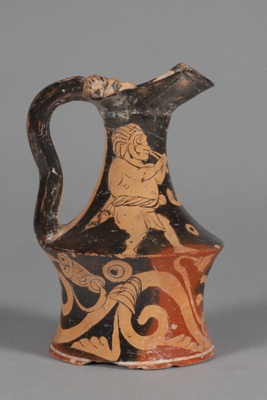 About this objectAn oinochoe is a jug for pouring wine or water. Made in the second half of the 4th Century BCE, the scene on the shoulder of this oinochoe shows three male figures participating in some sort of performance. All three are probably seen as masked and padded. The two right hand figures are dressed as satyrs, with pointed ears on their masks and short skirts with tails attached to the back. They are dancing to the music of the left-hand figure, who is playing a double flute (known as an aulos). The painter has made a point of showing the bulbous ends of the instrument.

On the concave wall of the vase is a wild design with palmettes, tendrils, and bell-flowers. The extensive use of sketchy relief contouring amongst fine, strong relief lines for detailing indicates that this painter was possibly new to the skill, or not very talented compared to other vase paintings of this period. The vase itself is heavy and strong, with the beaked spout and carinate body (a rounded base joined to an inward sloping body). The end of the handle is shaped like a ram's head which can be seen peering across the vase mouth.

The scene on this vase has a significant place in any discussion of drama in Etruria, and therefore of the origins of Roman drama, said to have been introduced by Etruscans in 364 BC (Livy vi.2, 3), even if the vase should be a little later than this. The figures appear to be involved in some sort of performance involving satyrs, although one should note that the mouths of the 'masks' are not open; they would seem not to have been speaking or singing even if they moved or danced to the sound of the aulos.

Although some scholars have supposed a connection between satyr-performances in Etruria and satyr-play in South Italy, the latter is extremely hard to judge since it was hardly ever depicted on vases after the very beginning of the fourth century and we have no literary evidence for its staging. Our scene reflects a local development at some remove from any Greek originals. It has been suggested that the scene is somehow borrowed from representations of satyr-play in South Italian vase-painting, but as noted, it is extremely difficult to find vases of which this may be any kind of reflection.