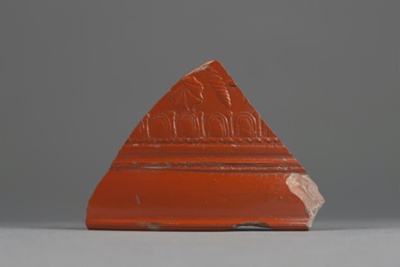 About this objectA fragment of a Samian ware bowl with mould-made and incised decoration.

Samian ware, also known as terra sigillata, is a hard, glossy-slipped, fine tableware produced in the Gallic provinces of the Roman Empire in the 1st to mid-3rd century CE.

Samian ware was a Gallic version of Arretine Ware, a popular and high-quality tableware produced in the region of Arretium (modern Arezzo) in Italy. Both pottery types were influenced by and imitated metal prototypes and the direct links between metal and ceramic bowls can be seen in some of the surviving metal vessels from the 1st century CE such as those from Pompeii.

The common characteristics of Samian ware include a hard-fired pink, orange, or pale brown clay, with a smooth, semi-glossy to glossy red slip. Vessels were produced in a range of shapes and sizes, including cups, plates, bowls, dishes, jars, beakers and inkwells.

Many Samian vessel forms were wheel-made and undecorated, except for simple appliqués on the exterior, fine grooves and often a potter's stamp on the floor. Of the decorated vessels, only three main types of bowl were made, using a mould and decorated in relief on the exterior. This fragment is from a bowl made by mould, originating in the workshops of South Gaul, early in the Samian series. The decorative elements on South Gallic bowls usually include a repeating band of ovolos and tongues or an egg and dart pattern at the top, often in association with a wavy line, as can be seen on this example.

On this piece the ovolo is double-bordered and in between each ovolo is a neat tongue or dart ending in a beaded tip. Below these is the remnant of a vegetal scroll, revealing a polygonal leaf and a twisted bud. On the inner face a deeply cut double groove marks off the lip. This use of the wavy line, the ovolo, and the specific leaf and bud are all characteristic of the work of Masclus (sometimes seen as Masculus), a South Gallic potter and are typical of his style on bowls of this form. The unbroken bowl would have had his stamp on the bottom as part of the mould. Stylistic and comparative studies for vessels produced by Masclus date this sherd from the time of Claudius to the reign of Nero, 41-68 CE.

Inscription and MarksLabel on reverse '25'