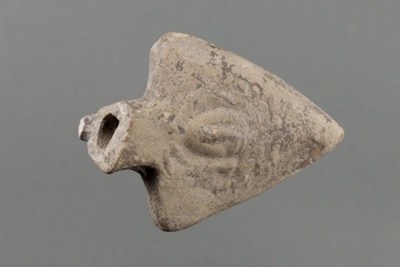 Name/TitleFragment of a lamp handle

About this objectThis triangular fragment is a handle attachment that has broken from a clay lamp. The relief decoration is produced using two moulds, creating a front and a back section that were joined together, then attached to the main body of the lamp. Although the surface is worn, the brown-grey clay still shows signs of a dark slip that would have covered the entire vessel.

The image on this fragment represents Medusa, the terrifying monster from mythology, whose gaze could turn her victims into stone. She was a popular subject in many art forms throughout the first and second centuries AD. The shape of the ornamental plate and the Medusa relief parallels a lamp now in the Egyptian Museum in Florence. Both were probably produced in the same mould and at the same manufacturing centre.

To judge by the clay, this lamp was probably made in Alexandria. Lamps such as this were direct copies of Italian lamps, which became very popular there. They had large oil chambers, often with two nozzles, as well as ring handles, decorated at the back with large handles.

The flat surface of the handles provided a ready surface for relief decoration. Acanthus leaves and palmettes were common, copying contemporary motifs on Italian lamps. Busts of deities and mythological figures were also popular and included local gods Serapis and Zeus Ammon, as well as Helios, Apollo, and Selene.

Place NotesProbably made in Alexandria