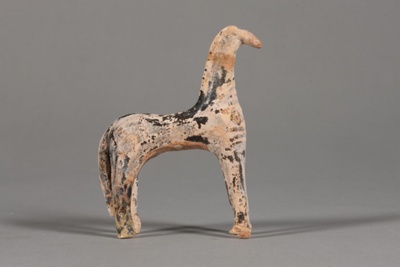 About this objectThis terracotta horse figurine was probably made in Athens or the surrounding Attica district, around 740-720 BCE. It was most likely one of a group of three or four horses which would have decorated the lid of a pyxis. A pyxis was a vessel used to hold cosmetics, jewellery, toiletries, and similar small objects. They were used in the household, but were also often placed in the graves of women and young girls. Decorating the lid with horses appears to have started around the 9th century BCE, originating as an Athenian invention. The figurines could be single or grouped up to four, similar to a chariot formation.

Horses were a symbol of wealth and rank in the ancient world, as they were expensive to buy and care for. The presence of horses as figurines could have been used to indicate or reinforce the high status of the person or signify wishes for wealth in the afterlife. Horses were also admired for their grace, speed, and strength, and have been considered a metaphor for physical beauty.

This horse has been made of a pale orange-buff clay and decorated in black paint. The hollow body has a small circular vent hole under the belly to help moisture escape from the clay during firing. Small pellets of clay have been added to form ears, and the back of the neck has been smoothed into a ridge that suggests a mane. The neck, mane, legs, back haunches, and central body all appear to have been painted solid. The tail is decorated with a band of hatching. Across the front of the chest is a series of tangential circles filled with dots, with bands running above and below. The surface of the head is worn, but the small size appears to be part of the style of the time rather than an error in shaping.