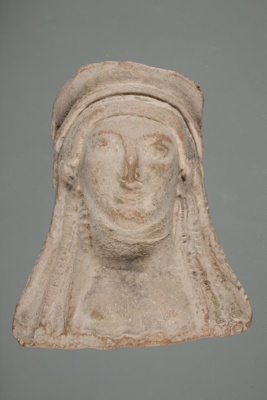 About this objectA terracotta bust of a female, which is likely to have been made as a votive offering. This figurine would have been made by pressing the clay into a mould, but the mould was worn when our piece was made, leading to some of the details being a little blurred. Records indicate that the figurine may have come from Selinus, or Selinunte, an Ancient Greek city on the island of Sicily.

The hair above the woman's face and down to her shoulders is dressed and beaded in three rows. Over her head she wears a diadem or polos. The style of the hair and some aspects of the handling of the face, especially around the mouth, have an archaic flavour, but other aspects such as the treatment of the brow and nose suggest that one should be looking at a production date nearer the middle of the fifth century BC.

The figure is possibly a representation of the goddess Demeter, or her daughter Persephone (also known as Kore). She had a special place in the religion of Greek Sicily, appropriately enough on an island that was a major source of wheat in the Classical world.

Place NotesSaid to have been acquired in Selinus, Sicily