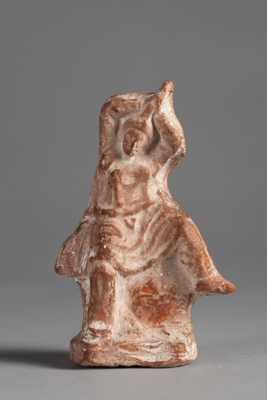 About this objectTerracotta figurine of a woman dancing. The dancer has a peaked cap and wears a loose chiton (tunic). It is unclear if she has footwear. To judge by the drapery, she is swinging to her left with her left leg raised, and places her hands over her head, with her palms together.

The front of the figurine was formed in a mould, while the back was made from a simple sheet of clay. There is a large rectangular vent-hole in the reverse of the figurine.

The woman appears to be performing a type of dance known as the oklasma. The name oklasma comes from the verb Όκλάζειν, to crouch, which the dancer did by bending the knees and clasping the hands above, and then leaping up. Although the dance was originally performed in honour of the Phrygian god Sabazios, once it became established in Athens in the late fifth or early fourth century BC, it was soon associated with the cult of the Greek god Dionysos (sometimes spelled Dionysus).

The style of our figure suggests it was made around the middle of the fourth century BC. This figure was bought together with JLMC 65.62 and both were said to have come from Kerch (Crimea).

Inscription and MarksThere is an old number written in ink at the top on the back and with a line through it: 21420[?].