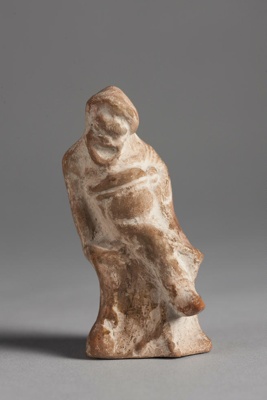 About this objectThis terracotta figurine shows a theatre actor in costume as slave. The actor is shown seated, leaning to rest on his right hand. There is a roll of drapery about his waist and he had his cloak on his left arm (traces of the folds remain on the upper arm). His left arm seems to be resting by his side.

The actor is wearing a comedy mask, which indicates his role as a slave. The mask has a roll of hair about the front of the head, button eyes, and a semicircular beard. The impression that he has a cap is misleading. The mask the actor wears in the figurine is of Type B, the most common slave mask type from theatre and the precursor of that of the Leading Slave of Menandrian comedy.

The motif of a slave taking refuge on an altar became something of a commonplace in later fourth-century BC comedy, as is evident too from a number of comic scenes painted on vases.

The figurine is hollow and was made from a worn mould, with all the detail on the front. The back is plain, and has a rectangular vent-hole cut into it.

The figurine was bought together with JLMC 64.62 and both appear to have been manufactured in Kerch (Crimea). However it is likely that they were both made from moulds taken from imported Attic terracotta figurines of the late fourth century BC.