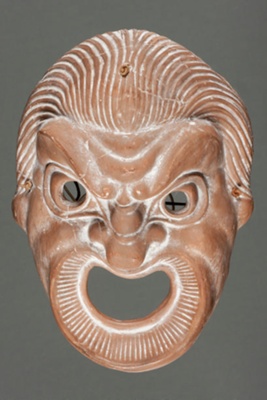 About this objectThis plaster cast is a replica of an ancient sculpture in the form of a male comic mask used in Greek theatre. The replica is made from plaster and has been brush painted. There is a small metal disc on the straps, a manufacturers badge for the Greek Ministry of Culture.

The face has prominent features highlighted by its bright off-white wash. The mask features accentuated furrowed brows and brow bone, uniform eye holes, a large, wrinkled nose and a wide cut out smile with large textured lips. The hair appears smoothed back and straight or untextured. The replica has leather fastenings on the reverse. The cast also features replicated cracks and fractures based on the original piece.

This mask is of a comic slave character, identified by its trumpet shaped-mouth, striated beard, snub nose and protruding forehead. Satyr and slave masks were intended to reflect the opposite of what was thought to be attractive in ancient times. This separated them from the lead characters by making them appear grotesque and undesirable. The slave was a common stock character in Greek comedy. Slave characters had a funny appearance and often made sexual jokes which entertained the audience. The slave character also often helped the main protagonist with a task in order to gain freedom as a reward.

The original sculpture on which this mask is based was found in the ancient agora of Athens. An agora is a central community space that accommodated businesses, the arts, sports, religious and spiritual gatherings, and political life in the city. The Athenian agora did not have an amphitheater, so theatrical performances would have taken place out in the open. The original sculptural mask may have been an architectural decoration to commemorate the performances that took place in the agora.