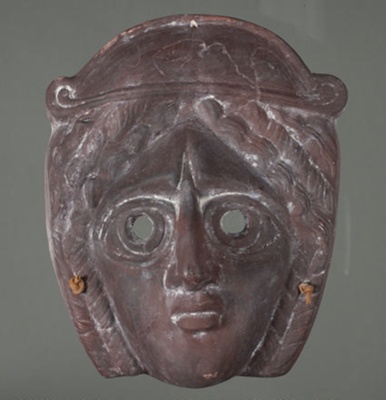 About this objectThis is a plaster cast copy of an original artefact now held in the collection of the Ancient Agora Museum in Athens. It is a pantomime mask, indicated by its eyeholes and the lack of mouth hole. A mouth wasn't required because these characters did not have lines. The original artefact was found on the site of the ancient Agora, or marketplace, in Athens, and dates to around the first half of the 3rd century CE.

The character on this mask is female, identified by her long, wavy braided hair and soft features. She has a large, pointed nose, small, pursed lips, large oval-shaped eyes, and soft furrowed eyebrows. She wears a headdress, which features cracks copied from the original artefact.

This mask has leather fastenings attached to the sides of the face and has an extra hole at the top of her head for upper fastenings. The reverse of the mask is very smooth, indicating that it was potentially made using a double-mould system. The mask is a deep purple/brown colour highlighted by a bright white wash of paint which accentuates the textures created in the plaster.

Roman pantomime was a performance act in which the character, the pantomimus, did not speak, but portrayed stories through imitation and movement, supported by a chorus and music. It was an extremely popular art form under the Roman empire.

In ancient theatre women were not allowed to participate as actors. This meant that all female-presenting characters in theatre were played by male actors. Female characters were included for realism or comedic purposes only. Theatre performances were written by men, performed by men, and intended for a male audience. In fact, there is no definitive evidence that women were allowed to watch theatre. It is thought that slaves, foreigners, children, and women were allowed to join the audience, but only when all the present male citizens had found a seat. This idea is similar to the order in which audiences were formed in the Colosseum.