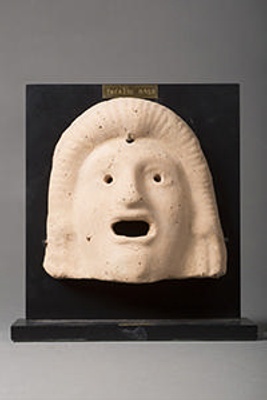 About this objectThis is a Roman theatre mask made from terracotta, depicting a male character. It is a beige, almost pink, colour and the terracotta is embedded with various stones, pebbles and other debris. The mask features two uniform eye holes and a hole for the mouth, as well as a small suspension hole just above the character’s forehead.

The mask was probably mould-made, which is suggested by the face being so smooth and uniform. The reverse surface is uneven from when the clay was pressed in to the mould, and there are fingerprints on the left reverse as well, suggesting the mask was made by hand. The reverse is very organic and bumpy.

The mask appears to represent a male character with long braided hair, visible eye sockets and a nose that seems very flat and worn. The character also has a natural shaped, wide-open mouth.

The masks that real actors wore in antiquity were not like the terracotta examples found in museums today but were made of soft textile fabrics. Scholars speculate that the materials used to make real theatre masks ranged from cloth to cork, wood, and animal hair. Due to the materials not being long lasting, we do not have any examples of a true theatre mask today – the only surviving evidence of theatre masks is representations of them in vase paintings and the terracotta representations like this, as well as a few select descriptions from primary sources such as the observations in Julius Pollux’s Onomasticon, and Aristotle’s Poetics.

This begs the question of what terracotta masks like this were made for. It is hard to tell with little to no evidence, and scholars have yet to find a definitive answer, but we can make some viable guesses. They may have been used as decoration in one's home or in public places such as the theatre, they may have also been used as votive offerings, or they may have been funerary offerings left in the grave.

Credit LineDonated by the PhiloLogie Society, 2017.