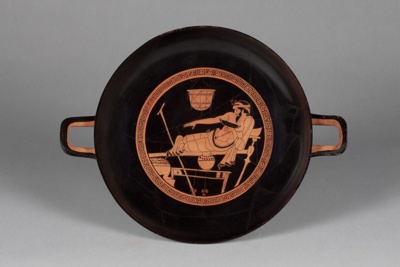 About this objectThe aristocratic Athenian male on this drinking cup (kylix) is seen enjoying himself at an ancient symposium, also known as a drinking party. He reclines on a couch, legs bent back, leaning on his left elbow, and holds a cup from which he will drink, similar to the vessel on which he is shown. He is bearded and has a celebratory wreath (filet) around his head decorated with wine leaves in the spirit of the occasion.

His right arm is stretched out, as if gesturing to someone. His mouth is slightly open as if he is singing or shouting, which confirms the traditional idea that drinking parties were noisy affairs. The walking stick propped against the couch may be needed later in the evening to support him on his way home.

In front of him is a three legged table on which is placed a jug from which a wreath hangs. To the left is a brazier burning with charcoal, or it may be a bowl of nuts or grapes. A food basket hangs from the wall above.

Subject and Association KeywordsInteriors in art

Subject and Association KeywordsSymposium in art