An Education Beyond the Classroom: Professor Haslam and his approach to education.

The idea that a university might not only nurture the intellectual life of its students, but also contribute to their social and cultural wellbeing, was proposed surprisingly early in the history of the University of Canterbury. One of its foremost proponents was a professor of Classics, Francis William Haslam.

I first started researching Professor Haslam for a public talk presented as part of the 2019 BECA Christchurch Heritage Festival. The talk, which was part of the series entitled “For the love of Classics – Encountering local heroes of Classics at the Teece Museum”, explored the life of Francis Haslam and his contribution to life at Canterbury College through the many sporting and academic clubs he supported during his career.

A sense of community

As a Cambridge Scholar, Haslam brought with him to Canterbury College the idea that a university should have a sense of community centred around communal living and college sport. He wasted no time sharing his thoughts on the subject as he stated in his inaugural public lecture:

“We have as yet no collective undergraduate life, but if we wish to keep the pick of our youth, we must give them something besides mere lectures, we must make it possible for them to come from all parts of the colony and find collected and domiciled here the choicest intellectual spirits of their own age.”

Life outside the Classroom

Throughout his time at Canterbury College Haslam was an active member of many sporting and academic clubs. Most notably he was a member of the Dialectic Society as well as founder and president of the football club. He was also involved in the athletics club and rowing club, while also providing awards for the cross-country steeplechase and inter-university rifle shooting competition. For a while he was also both an active member and President of the Philosophical Institute.

The Dialectic Society, which was one of the first clubs established at Canterbury College, held numerous debates, concerts and informal meetings. In 1884 Haslam was appointed the honorary President of the Dialectic Society and gave the presidential address which was entitled “Dialectic: Its History and its Place in Education.” The Dialectic Society also put on dramatic performances for Diploma Day celebrations, and in 1888 presented an adapted version of Aristophanes The Clouds composed by Haslam himself. Although a copy of the play is yet to be found we do know, thanks to A History of UC and the Canterbury College Review, that it touched on some topical local matters and that O.T.J. Alpers, one of the students who was playing the character of Strepsiades, was “embarrassed by the melting of his putty nose during the performance.”

The ‘Father of College Football’

Haslam was a strong advocate for university sport and was an instrumental figure in the establishment of the football club earning himself the title of the “Father of College football”. He was not only coach and manager but also played in some of the early matches as half-back. In 1883 the Lyttelton Times wrote that “he showed his men that he could teach them something on the football field as well as in the classroom.” Haslam was still playing in matches when the First XV was accepted into the formalised Canterbury Rugby Football Union Senior competition. In 1886 the first inter-university match was played against Otago University. Before the match Haslam wrote to the Captain, Heinrich von Haast, saying:

“My Dear von Haast, It’s no good my attempting to play tomorrow.
This change in the weather has pretty well done for me. I should only make a fool of myself and perhaps lose the game for us… I should have liked the thought afterwards that I was one of the first ‘inter-university fifteen,’ but it can’t be helped.”

Canterbury ended up winning the match five points to four and as W.D. Bean’s winning kick went over, Haslam’s bowler hat could be seen “soaring into the clouds”. Haslam continued to act as coach and manager and was president of the club when it was formalised in 1886 until his retirement in 1912 when the club was saddened by the loss of such an avid supporter.

After over 30 years at Canterbury College Haslam retired in 1912, but remained a prominent figure in Christchurch society, working to support the war effort. He even took on a position at Christ’s College to allow a member of staff to do military service. Haslam died in a private hospital in Auckland on November 23rd 1923 aged 75. His obituary in the New Zealand Herald noted his work at Canterbury College and for his sporting achievements.

Francis Haslam was remembered by Canterbury College as a patient teacher who instilled a love of knowledge in his students. He should also be acknowledged for his contribution to the development of a university community which enriched the lives of students beyond the classroom.

Emily Rosevear recently competed her Master’s Degree in History at the University of Canterbury and currently works as a Gallery Host at the Teece Museum of Classical Antiquities.

Hight, James and Alice M. F. Candy. A Short History of the Canterbury College (University of New Zealand) With a Register of Graduates and Associates of the College. Auckland: Whitcomb and Tombs Limited, 1927.

As the nation moves into isolation as a result of the Covid-19 (coronavirus) pandemic, the Teece Museum and most other museums and galleries are closing their doors. Ironically, as we all become a little more physically distant, this seems like an excellent time for the Teece to finally launch its very own blog. 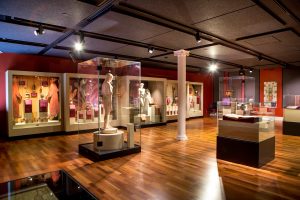 It is incredibly important that we all do our bit to ensure that the community remains safe and reduce the risk of further infections. So what can a museum do to contribute in times like these? We think one of the ways we can support everyone is to reach out virtually, and provide alternative ways for the community to interact with, and enjoy, our shared heritage.

Thanks in part to many of our former interns, the Teece already has a number of digital exhibitions and resources available online. Over the next few weeks while our gallery hosts are working from home, we will be using their considerable knowledge and talents to develop more online offerings including regular blog posts. We hope to use these articles to arouse your curiosity about the ancient world, consider its relationship to contemporary society, and give you a deeper glimpse behind the scenes into the world of a university museum.